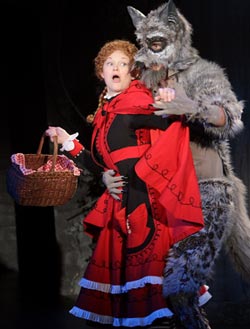 I didn’t get the second act of Stephen Sondheim’s “Into the Woods” when I saw it on Broadway in 1987. The show wrapped everything up tightly at the Act I curtain. All the fairy tales colliding on stage arrived at a happy ending and there seemed nowhere left to go. I used to tell people that the show had a great first act, but not much of an Act II.

And — spoiler alert — what was all that in the second act with a Giant shaking the scenery and killing off half the cast?

Now I’m twenty years older and I understand that fairy tales don’t always have happy endings and that loss and disappointment are part of life. I know from personal experience that “Once upon a time” and “I wish” and “Happily ever after” all rub against each other in unpredictable ways, just like Sondheim and James Lapine (who wrote the book) insist they do.

I wasn’t ready for “Into the Woods” when I first saw it. But the fabulous new production which opens Signature Theatre’s $16 million home in Northern Virginia makes sense all the way through, and delivers the show’s heart-rending, and ultimately heartwarming, message. Act II? Maybe it still drags a tiny bit. But that’s life. 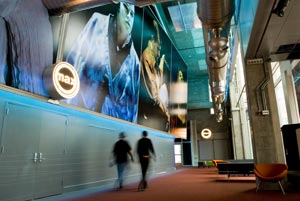 First, the jaw dropping new space for the D.C. area’s best theater company is another kind of fairy tale. (New Signature lobby, photo Scott Suchman) That’s the one where hard work and penury are rewarded, and creativity and pluck triumph. The theater began in 1989 as part of the Arlington, Virginia arts incubator program. The loyal audience, which got used to dodging traffic along the industrial strip where the theater lived in an old bumper plating factory, now numbers more than 4500 subscribers, and the operation has an annual budget of $4.5 million, which still seems absurdly low for what they accomplish.

The theater’s artistic director and co-founder, Eric Schaeffer, has developed a personal style that depends on honest, unamplified voices, and performances big enough to be appealing, but intimate enough to experience from inches away. You entered Signature’s old space, fondly called The Garage, for each production through a hallway designed to introduce you to the ambience, colors, and feel of the set. Even with the $16 million upgrade, that’s one of many touches they’ve brought to their new home, just around the corner from the old. (Hear WETA-FM’s Deb Lamberton on the new theater space.) 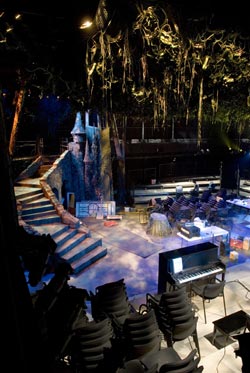 More to the point, the new spaces (there are two theaters now, one seating 299, and a 99-seater for smaller shows) are still “black boxes.” That is, infinitely malleable for designers who can decide where the audience, the orchestra, and the action will go in response to each script. It’s clear that Robert Perdziola, who designed the set and costumes for “Woods,” was out to give the big space (called the MAX) a real workout. And you get a sense of exploration, of every trick being pulled out and tested for effect. (Set under construction, photo Scott Suchman)

In some ways, “Into the Woods” is like one of those clever kids’ movies that appears to tell one kind of story, but signals by its language and attitude that it’s speaking over the heads of its purported audience directly to their parents. “Once upon a time…” it begins… “I wish…” — and off we go, into the worlds of Cinderella, Jack and the Beanstalk, Little Red Riding Hood, Rapunzel, and the Baker and his Wife.

Which of these, you may ask, is not like the others? It would be easy to watch “Into the Woods” and assume that the last story, of a childless and bereft baker and his wife was one of those you were out of the room for when the teacher read them in third grade — but actually, that one is new, slipped in among the others to amplify the themes of love and loss, of hope for the next generation, and sadness inevitably mixed with that hope. (See NYT 11-1-87, with registration)

And that’s not to say the other stories are played quite straight. Little Red Riding Hood is a bit more annoying than you remember her. Rapunzel, too has her quirks. Cinderella is actually running away from her Prince, and with good reason. And Jack was always a little greedy with his loot from the Giant — but here, his greed is nearly biblical in scale, and causes a world of pain to all the other characters in that corrective and restorative Act II. 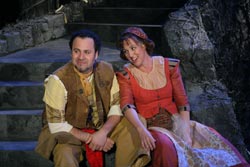 As the Baker, Daniel Cooney is earnest, sympathetic, though he seems to take a few moments to settle into his quest. It’s not long before it’s our quest, too. The witch has challenged him and his wife to a cosmic fairy tale scavenger hunt, demanding they gather a token from all the other characters: it’s the thing our story’s protagonists are least likely to want to part with (Cinderella’s golden slipper, Rapunzel’s hair). But if he can win the game, the baker and his wife will be rewarded with a child. The Baker’s Wife (April Harr Blandin) is in many ways at the center of the story. Her quest is not only to gather the tokens, but to convince her husband that she’s an equal partner in the hunt, and in their lives. Finally, late in Act One, the couple sing “It Takes Two.” They’ve figured out that way beyond biology, it takes two to make and raise a child. (photo by Carol Pratt)

At intermission, the quest is done, the couple is to be rewarded with a child, Rapunzel and Cinderella have met their mates, and Jack and his mom are thriving, growing rich with loot from the Giant’s lair. Oh, sure, there are losers, as there always are, like Cinderella’s ungainly sisters, and the Wolf, now a lovely wolf coat for Little Red Riding Hood.

But that troubling Act II brings complications we mightn’t have expected. Another loser, who shakes the scenery and booms over the theater’s loudspeakers like the voice of God, rejects the idea that happiness lasts forever. The Giant’s disembodied wife is out to settle some scores, and before we know it, everyone has lost what they so eagerly sought. But then, through the magic of Sondheim’s harmony, the characters find each other (No One is Alone) and point the way to the future (Children Will Listen).

Stephanie Waters as Cinderella is a sweet and conflicted foil to Lauren Williams’s acid-tongued Little Red Riding Hood; Rapunzel’s Prince, Sean MacLaughlin, and Cinderella’s Prince, James Moye, are perfectly matched airheads (think Luke and Owen Wilson in some of their lower IQ roles) as they gallop hither and thither, win the affection of their ladies, and wonder if they couldn’t have done better (Agony); and as Jack’s mother, Donna Migliaccio, a Signature co-founder, carries with her the 17-year history of direct emotional connection she’s brought to roles big and small from the theater’s inception to its full flowering.

No One is Alone 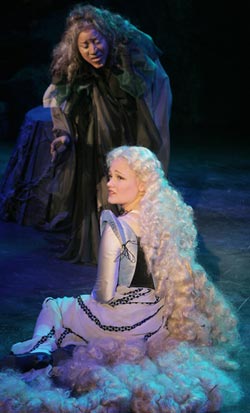 In a role played on Broadway by Bernadette Peters, Eleasha Gamble as the Witch makes the switch from crone to diva, and stirs the plots to keep them simmering. (Gamble and Erin Driscoll as Rapunzel, photo, Carol Pratt) When she realizes that not even a witch can have it all — magic and beauty, feelings and a fire-shooting staff — we sympathize almost despite ourselves. After all, aren’t we supposed to fear and hide from the evil witch character in these stories? Not in the world of Sondheim and Lapine, where personal responsibility and community trump evil.

But one character can have it all, and that’s composer and lyricist Sondheim. With wit and spirit, he keeps us shaking our heads at his endless creativity and bottomless store of awful puns and sparkling wordplay. You might want to shoot a songwriter who wrote, about a milk-less cow, that “We’ve no time to dither/while her withers wither with her.” Or, of Jack and his beanstalk, “If the end is right/it justifies the beans.” But no, celebrating, rather than shooting is what’s called for.

Because if all this cleverness were not in service of deep, human, emotional connections, we’d simply write it off as meaningless. Here, the opposite is true. Through quicksilver language and mellifluous song, in a production that melds the extraordinary talents of everyone involved, “Into the Woods” opens Signature Theatre’s own second act with a show and a production worthy of its storied history and its boundless future. Take that, F. Scott Fitzgerald.

This entry was posted in Theater. Bookmark the permalink.