‘Gem of the Ocean’ at Arena Stage, Washington, D.C. fails to shine 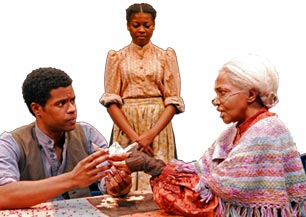 For August Wilson’s “Gem of the Ocean” to work its magic, you’ve got to believe that the assortment of people onstage are a family. From the ageless matriarch Aunt Ester, who claims to be centuries old, to the others who protect her and help extend her influence into the community where she “washes souls” on Tuesdays… these men and women must create a believable and tightly knit world.

In Paulette Randall’s staging of the play at Arena Stage in Washington, D.C., we don’t believe that Solly Two Kings and Eli worked together for years in the Underground Railroad; we miss the secret looks and signs that would alert us to the love and dependencies these characters have for one another. And the outsized, and histrionic behavior of the individual characters never allows them to quite mesh with each other, but merely calls attention to their individuality. The play glows with wonder and pain, especially in the second act, but the lack of connections is felt throughout, and stops the performance from engaging and devastating us, as this work might clearly do.

August Wilson, who died in October, 2005 left behind a towering achievement. He wrote a play for every decade of the 20th Century, based on the life of the Black community in his native Pittsburgh. Many critics agree with hometown writer Christopher Rawson, of the Pittsburgh Post-Gazette, who says “For scope and power, the Pittsburgh Cycle is a coherent, focused achievement unmatched by any other American playwright.” That said, the first act of Gem of the Ocean builds slowly and fitfully. We meet Aunt Ester (Lynnie Godfrey) when Citizen Barlow (Jimonn Cole) knocks at her door seeking absolution from an unspecified crime. Eli (Clayton Lebouef) and Black Mary (Pascale Armand) live under Ester’s roof, and traveling salesman Rutherford Selig (Timmy Ray James) is a regular visitor, treated as another family member, even though he’s white.

We soon meet Caesar (LeLand Gantt), the local enforcer, and Solly Two Kings (Joseph Marcell), a former slave with family left behind down South. Before we know it, we’re caught up in the politics of the local mill, and the mysterious death of a man pursued by the law for stealing a bucket of nails – a crime of which he is innocent. As we wait for the plot to jell, and for the true meanings to be revealed in Act Two, we start to know the characters and their distinctive tales.

Arena’s stage presents at least one challenge to a director, one which artistic director Molly Smith usually solves creatively. With a theater completely in the round, actors must always be moving, so that only a word or two, but never a whole sentence or beat is lost. Too often in this show, beats are thrown away, as actors deliver a series of lines to two thirds of the house, without awareness that their backs are not expressively telling the same story.

It’s in Act Two, when we finally realize that this show contains a powerful heart, that the production nearly redeems itself. It turns out that Aunt Ester’s secret ceremony of cleansing and renewal involves an exorcism of sorts. She conjures the history of slavery, from the first passage across the Atlantic to the last broken shackle. Aunt Ester’s magic is the ability to recall that black history, and use it to redeem souls, shooting them forward into the 20th Century and new possibilities for African American lives.

In staging this ceremony, Paulette Randall brings the theater alive with ghosts and pain. The circular stage no longer fights the actors and hides the action, it becomes a slave ship, groaning and creaking, howling with the screams of millions of Africans lost at sea on their way to the new world in slave ships. When things return to normal, it’s all the more disappointing that the ensemble, briefly having risen to this peak, once again fritters our attention away on posturing and missed connections. But for a moment, we glimpse the play’s shattering core, and we can understand how it fits in to August Wilson’s memorable cycle of life and pain for Black America in the last century.

This entry was posted in Theater. Bookmark the permalink.