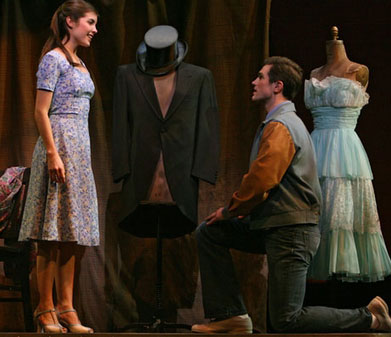 “I Feel Pretty.” Or “Siento Hermosa.” The brilliant and problematic stroke of genius in this new production of West Side Story, seen at Washington’s National Theater, is not only to have real Latinos playing most of the Sharks, but to have them sing and speak in Spanish, as well as English.

So why do I feel robbed, rather than pretty?Well, one of the great pleasures of WSS is to hear the poetry of songs like “I Feel Pretty/Oh so pretty/I feel pretty, and witty and bright/And I pity/Any girl who isn’t me tonight.”

And although I speak some Spanish, I’m not good enough to appreciate whether Lin-Manuel Miranda’s Spanish translations catch the quicksilver poetry of the young Stephen Sondheim.I’m told that the early previews in Washington (I caught the show on December 30, and the plan was to open to the press January 7) included supertitles so that English-only speakers could understand the large sections of Spanish in the show. They’d done away with the translations by the time we caught WSS – presumably on the theory that most of the audience would catch on to the action in this well-known and well–loved show, and that the slight feeling of disorientation English speakers might experience was a good metaphor for what Spanish speakers cope with upon coming to America.

[Read about West Side Story in Spanish or English]

Perhaps. But as anyone who has seen and loved West Side Story over the past 50 years will tell you, the Spanish/English problem is not the main reason why the show sometimes refuses to play. The problem, as my cousin Marc says, is all those tough guys dancing around. The Jets and Sharks want to kill each other, but Jerome Robbins has them dancing with each other instead.I’m absolutely sure that this was exciting, even thrilling, in 1957. But since the movie came out in 1961, the dancing has effectively killed much of the drama in WSS, at least to my eye and ear.

Beyond that – the cops, especially Officer Krupke, seem all wrong in this production; the musical arrangements sometimes seem out of sync; and it’s far too easy to leave the theater dry-eyed and unaffected by the drama.

Arthur Laurents, the show’s librettist (and the director of this production) who is now 90 years old, has tried to reimagine the show for an America where Spanish is now on the verge of becoming our semi-official second language. He’s also juiced up the anger and psychosis of the gang members to avoid the prancing killers problem. But unless the show changes significantly before it gets to Broadway, there could be a major train wreck.

Photo by Joan Marcus. Josefina Scaglione as Maria and Matt Cavenaugh as Tony.