Waiting for Godot: Second Acts in an Uncertain World 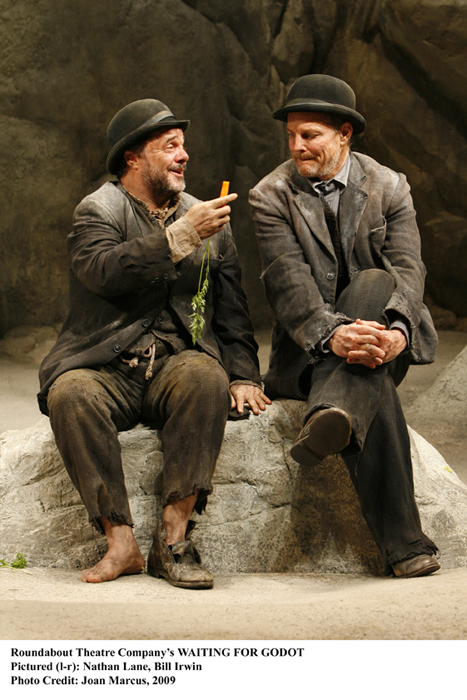 A dog came in the kitchen
And stole a crust of bread,
Then cook up with the ladle,
And beat him ’til he was dead.
Then all the dogs came running
And dug the dog a tomb
And wrote upon the tombstone
For the eyes of dogs to come…
(repeat)

Is there a name for this kind of Escher-like song that winds around and bites its tail and provides the promise that it could go on forever? Let me know.

So. Bill Irwin as Vladimir, one of two existential tramps, has come on stage singing this ditty to open the second act of “Waiting for Godot.”

The second act, always an Everest for a playwright to conquer, is especially important to ‘Godot,’ since it is a play about such fundamental questions as: what does our life mean? What is memory? If our being here is a result of God’s work, is it an act of bad faith on His part? And if God has written Act I, what’s the evidence it actually happened, and who’s in charge during Act II?

And yet we wait.

Meanwhile – in Bill Irwin’s singing, I found the meaning of a play nearly everyone acknowledges as one of the towering achievements of 20th century drama. The hit production, extended through July, represents the first time since its New York premiere in 1956 that “Waiting for Godot” has returned to Broadway.

Back to Irwin. The funny thing that happens at the top of Act Two is that after Irwin finishes his song, he keeps singing the rest of his dialogue. I don’t believe that’s a stage direction. There certainly isn’t a score. Yet every word is sung with carefully considered pitch and rhythm. Perhaps he sang all the way through Act One as well, but now there’s no way to go back and be sure.

The content is almost secondary. Vague stuff about the Bible, and whether we’re surrounded by the souls of all the people who ever lived. Perhaps we’re already one of those dead. We fear that we’re here on earth living in a meaningless dream.

What’s funny, too, is that Irwin is sharing the stage with one of Broadway’s best and most accomplished musical comedy stars. And Nathan Lane as Vladimir’s partner in life, Estragon, refuses to sing.  Instead, he communicates using every inch of his body. With a turn of the head here, a spray of “air quotes” there, a slightly raised eyebrow to top it all off, Lane reminds us that we are in the presence of an actor used to owning the stage, yet fully comfortable sharing it. But there’s no shtick. No trademark Nathan Lane wiseguy-isms. Or not too many.

At this point in thinking about Godot, I went back to find out which part–Estragon or Vladimir, Nathan Lane or Bill Irwin–was originally played by Bert Lahr, best known as the rubber-legged Cowardly Lion in The Wizard of Oz. It was Estragon–the member of the duo with fewer questions, more time for dreaming, and a bit higher highs and lower lows. Perhaps when the Wizard of Oz is next revived, in some medium, Lane can return the favor by playing the scaredy-cat without a lion’s courage.

Second Acts. As we grow older, is change possible? The barren tree, which dominates the set of grey rockpiles has sprouted mysterious and rather useless leaves during intermission.

Is that change? Do people in command, like the brutish Pozzo played by an imperious and physically imposing John Goodman, change, even if it’s not to their advantage? And what of Pozzo’s slave, the ironically named Lucky? Are we surprised when he insists on handing his own chains to master Pozzo, as if to reinforce his powerlessness, and ours? (With four spectacular performances, John Glover’s feral Lucky is the only one recognized with a Tony nomination.

Goodman plays the Second Act as a beached walrus, a killer whale who has forgotten how to kill. Yes, kings and emperors die. Ashes to ashes. Pozzo is blind. Sans eyes, sans teeth, as Shakespeare had it, sans everything.

So what are we to take away from Godot? What keeps us from rising out of our seats at the end of Act Two, and slitting our wrists about the hopelessness and meaninglessness of waiting for something that is sure never to come?

What sustains us? The waiting itself? Friendship? The power of words to conjure up a human world that, in flashes, almost makes the whole thing worthwhile? Maybe.

Or maybe it’s song. Bill Irwin’s magical addition to Samuel Becket’s language gives it the wings that are only latent on the page. Ideas, emotions, our physical beings, the tone and smack of music, matter. We matter.

And then there’s laughter.  Maybe that’s what makes life bearable. There’s plenty of evidence in this warm and funny production that laughter can heal. Almost as much as the evidence that it cannot. This can’t be mere happiness of course. Laughing, as Vladimir know, grabbing his nether regions to staunch the pain from every chortle, hurts.

Still. That’s the conundrum. One of the funniest plays ever written about nothingness and existential dread sends the crowd out into the street on a Wednesday afternoon, happy to face another set of blows. That’s why Godot is good and great.

Now if I could only get to London, where Ian McKellen and Patrick Stewart are dazzling audiences in Godot this summer, my life would be complete.

3 Responses to Waiting for Godot: Second Acts in an Uncertain World