Not enough heat in this “Light in the Piazza” 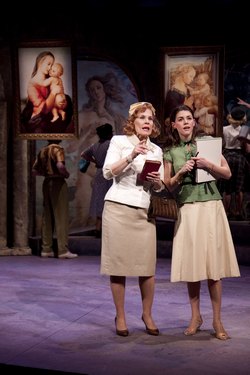 No I haven’t heard every musical produced on Broadway in the past decade – but I’d be surprised to find any show more ravishingly beautiful, more lyrical or sweeter than “The Light in the Piazza.” Is there a musical gene that runs in families? We don’t know for sure – but since Light’s music and lyrics are written by Adam Guettel, grandson of musical theater legend Richard Rogers (“Oklahoma,” “South Pacific,” “The King and I,” “Carousel”), he may be the best evidence yet that musical genius can be inherited.

“The Light in the Piazza” has just opened in Washington, in a production directed by Molly Smith, for Arena Stage. It hits all the right notes – but something is missing. The show ends up feeling thin. The lovely voices, the beautiful set, the strong performances don’t set off a river of tears, or even provide a fully engaging evening of theater. Why?

The problem starts with the concept. This is described as a “chamber” version of the show, with a reduced orchestra of five (electric piano, harp, violin, cello, and double bass) sitting in for the larger, original band, which featured a group of fifteen musicians with more strings, winds, some percussion, and a far lusher sound. Chamber versions of musicals have gotten popular in the past few years – and the cost savings are not the only reason. A small backing ensemble, presented on stage as part of the action or embedded in the scenery, can add an element of closeness and intimacy missing from a bigger orchestra.

But, in this case, the meaning of the show is carried not only by the pitches, harmonies, and voices – but by the sheer power of the music, including its timbre, rhythm, and loudness. With fewer instruments, some depth is palpably gone.

But what’s absent most of all in this production is a spark that would allow us to believe in and care about the relationship between the two young people, Clara and Fabrizio, who “meet cute” when her hat blows off in a Florentine square, he catches it, and the two fall hard for each other.

It’s 1953. Margaret Johnson has brought her daughter Clara to Europe with some hope that she can provide for her a better, richer life than she herself has lived.

The obstacle to that life is a mysterious and clearly mid-century malady – Clara, when she was 12, was kicked in the head by a pony – leaving her with a subtle but permanent brain injury. She is, literally, damaged goods, in the view of the day. She is a woman, but childlike, and in the eyes of her mother, unlikely to find a mate.

Despite her pessimistic outlook, Margaret slowly begins to feel hope for her daughter’s life as a woman. Maybe Clara can find a match far better than Margaret’s own loveless marriage to an unimaginative lump back home.

The show then becomes the story of how can Margaret can carry her daughter over the finish line, helping her find love and avoid disappointment with Fabrizio, and hide her daughter’s volcanic ups and downs and unsettling insecurities from Fabrizio’s family.

Guettel takes an operatic approach to his music. A number of tunes that a classical composer might call motifs, reoccur in the show and hook our subconscious with the emotional content and shape of their melodies.

Since it’s set in Italy, and features swaths of dialogue sung by Fabrizio’s family in Italian – it almost seems as if the entire subplot about his squabbling brother and his parents is inserted to emphasize the operatic aspects of the show…

But there’s no doubt, in the end, that this is an American musical in all its glory. As the couple makes a commitment to stay together forever, Guettel the lyricist spotlights the magic of Guettel the composer as the lovers sing “I think I hear the sound of wrap your arms around me” followed by phrase upon phrase of wordless song on open syllables of “ah.” What is the sound of “wrap your arms around me?” We hear it, and are ourselves in love.

But the stage picture that keeps returning to my mind is the image of Clara and Fabrizio coyly chasing each other around a hotel bed – before their first kiss. Yes, it’s a children’s game because Clara is childlike and Fabrizio naïve. But, God, if you don’t believe they really want each other as adults, deeply and sensually, then the fabulous and intimate connection this music carries in its every note is wasted. And that, in the end, is the feeling of a missed connection that I carried out of the theater.

This entry was posted in music, Theater and tagged arts, musicals, Theater, Washington. Bookmark the permalink.