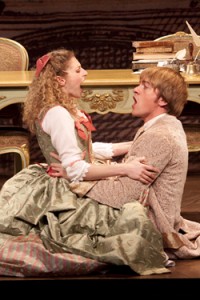 Boom buh da paaah! The Overture to “Candide,” along with the Symphonic Dances from “West Side Story,” are Leonard Bernstein’s gifts to the orchestral repertoire. After hearing the opening fanfare of the Candide overture a hundred times rocked by a full symphony, there’s no way that the dozen able players in the Mary Zimmerman production of Candide now at Washington’s Shakespeare Theatre wouldn’t sound a little anemic. (The show, running through January 9, is a co-production with Chicago’s Goodman Theatre.)

But the scaled-down sound also helps emphasize the humor and irony inherent in the very first notes of Bernstein’s wonderful score. Boom buh da paaah! indeed. By the time the overture is over, we’ve heard that figure enough times to know that the grand and glorious world it introduces may hold a few contrary notes. The “best of all possible worlds” the show pretends to celebrate at its open will be our own misshapen, problem-strewn globe.

Voltaire’s satire Candide; or The optimist, written in 1759, held many enticements for Bernstein and his collaborators in the mid-1950s. The war in Europe, with the extermination of millions of Jews, gypsies and homosexuals, was a fresh wound. Then came our own country’s announcement, via two atomic bombs, that American power was here to stay. The Soviets had a different idea – and a Senator named Joseph McCarthy spun the Soviet threat to his own ends, and subjected the political and artistic communities to a purge that defined the early part of the decade.

Instead of taking any of these issues on directly, Bernstein, lyricist Richard Wilbur, Hugh Wheeler who shaped Voltaire’s story into a picaresque play, and a star-studded cast of contributors including Dorothy Parker, Stephen Sondheim and Lillian Hellman, adopted and adapted Voltaire’s story of a young orphan, Candide (Geoff Packard) taken in by a noble family in German Westphalia, who is tossed out to seek his fortune in the world after falling in love with his adoptive sister Cunegonde (Lauren Molina).

Director Mary Zimmerman (a MacArthur Foundation “genius”) has further molded the stew that is Candide to fit the ensemble style she created over several decades with the Lookingglass Theatre in Chicago, and with other companies around the country. Candide is forever gaining and losing sidekicks as he pursues happiness and Cunegonde, sailing across cardboard seas, accompanied by tiny ships, with the set shapeshifting moment by moment, the atmosphere and the environment created by the clever use of bodies working together to create living stage pictures.

Along the way, for comic relief, they pick up the Old Lady (Hollis Resnik), who on account of having just one buttock, has a heck of a time getting comfortable, especially in the sitting position. Resnik’s clowning nearly steals the show whenever she’s on stage – but that’s not a criticism. The show, clocking in at about 3 hours, seems long, and her moments are a necessary distraction.

As Candide, Packard must somehow maintain the sunny worldview that the play mocks, and sing in a sweet and unaffected manner. He nails this. And Molina’s Cunegonde is given some of the most ravishing music ever written for a Broadway soprano. You understand why opera companies comfortably perform Candide.

But the length, and the show’s wacky journey around the world from Westphalia to the New World and back to the Old, have always been the “problem” of this otherwise promising show, which stayed just a few months in its original incarnation on Broadway. In 1956, Walter Kerr wrote in the New York Times: “Three of the most talented people our theater possesses—Lillian Hellman, Leonard Bernstein, [and director] Tyrone Guthrie—have joined hands to transform Voltaire’s Candide into a really spectacular disaster.”

Here’s the problem: Where do you go after nearly every character in the show has been beaten down, killed (and sometimes resurrected), betrayed and blindsided? Does the final profession of love for our world and our fellow man — “Make Our Garden Grow” — even belong in the same show as the bitter and wildly ironic satire that is the only thread sustaining us through the hours?

Zimmerman has no choice but to go for broke at the curtain, to try to knit the threads together: she marshals Bernstein’s soaring melody and harmony, with the cast literally on its knees begging our indulgence, to provide the pleasure that only a brilliant, transcendent piece of music can give us. Yet somehow, the bitterness and the humor remain intact as well.

It’s no wonder that flowers mockingly bloom out of a hundred tiny holes in every dimension of the set during “Garden Grow.” We know, though Bernstein didn’t, that the century still awaited the Chinese Cultural Revolution (Let a Thousand Flowers Bloom!) and mass killings from Cambodia to Africa. Still, one needs to wake up every day. And we thank Zimmerman for sending us out into the streets singing rather than slitting our wrists. And thanks Lenny. And Voltaire. We needed that. All of it.