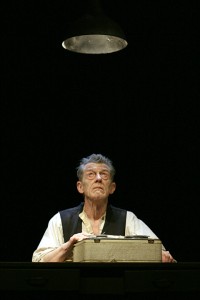 John Hurt – his face a topographic map of disappointment and failure – sits at a desk as a light above him slowly blooms. He is Krapp. His life, crap. As Samuel Beckett introduces him to us in Krapp’s Last Tape, he is a man who has seen better times, made manifest by the tapes he recorded in earlier days, which will be his companions and ours for an hour in the dark. This Gate Theatre production played at Washington’s Shakespeare Theatre Company earlier this month, one of only two U.S. venues for the show.

“Box three, spool five.” That’s the tape Krapp goes hunting for – after a pantomime that lasted, by the count of one audience member, 20 minutes. Maybe this silence does seem to last nearly forever, but it’s the magical time when we get to know the character. The dazed stare. The obsession with bananas. The mix of clown and yogi.

With Beckett, you never forget that things are happening on a stage, in a theater. But instead of distancing, what you get is intimacy. Hurt tests the limits of the light that binds him to a square of stage. He leans in and out, probing. He can break through the light to retrieve his boxes of tapes, but they are elsewhere in his house, or waiting in the wings. It doesn’t matter.

What are we to imagine of Krapp’s earlier life? There are the hinted-at digestive troubles, for which the bananas are both cause and cure; the inability to connect with people; the troubling realization that previous years were momentarily more hopeful, although the current collapse echoes a lifelong routine of isolation and despair

Why do we watch any production of this claustrophobic and dispiriting play? We want to see the magic of an actor, here a star in his prime, embodying Krapp’s worthless and meaningless existence. The power of Beckett’s craft, and Hurt’s is that this turns the hurt and damage in our own lives upside down, and the play becomes an ode to perseverance and personhood.

What keeps me alive and keeps me from slitting my wrists after seeing the best of Beckett performed by brilliant artists is a line like this: “Perhaps my best years are gone. I wouldn’t want them back.” We forge ahead. Regret isn’t really a viable option. The moments we live still have the ability to come alive, even if we are sitting alone, listening to our slightly more hopeful selves, or someone else’s, recorded on tape a very long time ago.