Two Gentlemen of Verona – Not! 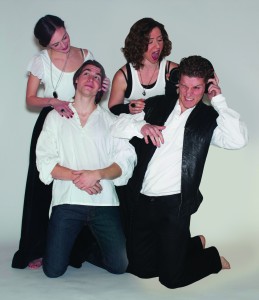 There’s a rumble going on – it starts in a suburban parking lot created from sheet metal and a few yellow lines on the stage of the Shakespeare Theatre Company’s Lansburgh Theater. (The playwright has simply called for “an open space.”) The kids there aren’t all right – they’re wild, into fighting and drinking and carrying on, staying up all night.

And we’ll soon find out the cause – hormones, and teen angst. This blaze of energy kicks off PJ Paparelli’s new production of The Two Gentlemen of Verona, just opened and rocking the stage in downtown D.C.

How you feel about this production will be guided by a lot of things, and not all of them are visible on the stage. Do you like updated productions of the Bard? Do you find the anachronistic display of the stuff of everyday life — from cell phones to handguns — a problem on the classic stage, or does it tickle your sense of possibility, and confirm the idea that Shakespeare can be relevant today?

I’ll state my bias.  I used to run in the other direction when Shakespeare was produced in a setting that self-consciously placed a story in a space and time engineered to show how smart and “creative” the director was. I’ve gotten over it.  Committed directors have been transporting Shakespeare anywhere they like for decades now, sometimes with stunning success and at other times with abject failure.

What matters are the results.

Are we swept into the life on stage, of whatever era? And does Shakespeare’s story, whether it happens in a setting that reminds us of his day, or of ours, teach us, to paraphrase Harold Bloom, what it means to be human?

Here’s how the PJ Paparelli lays out his vision: “‘Two Gentlemen’ reminds me of wealthy suburban life, where parents are wrapped up in their worries about the crashing economy and teenagers are left to their own devices. Our challenge is to allow the play to exist in its period while also releasing the energy and the echoes of today’s world.”

You may not know the story. Young Proteus (Nick Dillenburg) is in love. Not a little bit in love, a lot in love. He’s in love with Julia (Miriam Silverman), who is willing to give him a chance. They make love. They exchange rings.

Thou, Julia, thou hast metamorphosed me,
Made me neglect my studies, lose my time,
War with good counsel, set the world at nought;
Made wit with musing weak, heart sick with thought.

Valentine (Andrew Veenstra) is the best buddy of Proteus. Perhaps his name signals that he will be more constant in love. He is on his way out of town, seeking his fortune and his own love, in Milan.

There, the Duke’s daughter Silvia, a stunning Natalie Mitchell, is dodging the advances of her fiancé Thurio, as she basks in the attention of young Valentine.

Proteus follows Valentine to Milan, and is struck once again by love – this time for his buddy’s girlfriend, Silvia. He is willing to betray Valentine, and jettison Julia. When Valentine is exiled from Milan by Silvia’s father the Duke, Silvia holds firm against the advances of Proteus. Meanwhile Julia, dressed as a boy, follows Proteus to Milan.

But first, an unsettling moment. Julia, in despair, takes a knife and cuts herself, reminding the audience that she is a troubled teen of today. This is startling and feels like it could be out of place. It puts the audience on guard that modernizing the play may take us into uncomfortable territory. It’s about this time you have to remind yourself that this is, after all, a comedy. Perhaps you’ll be reassured that nothing really awful will happen to anyone. If so, you can skate by the cutting and the coming pistol play, as each of the young protagonists threatens to blow out his brains.

They don’t. And, in the end, everyone is happy, forgiven, reunited.

And there’s a dog – a cute, obedient, funny, and thoughtful cur, who effortlessly steals every scene he’s in. In this season of dog performers (what, no Oscar nod for Uggie?), the Shakespeare Theatre is right up to the moment here, too.

So does the play “work?” I left the theater cursing at the miraculous, too-easy ending and the changeable and immature attitude about something as serious as love that made me want to wring shallow Proteus’s neck, but nevertheless made me hope that he and Julia, and Valentine and Silvia would be happy.

They’d come alive for me. That’s all I ask for in a night of theater.

One Response to Two Gentlemen of Verona – Not!