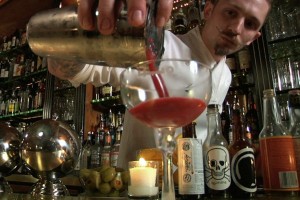 Not the best or most affecting – and others here might be perfect as well. But as a fellow craftsman, here’s why I think Hey Bartender is the perfect doc. Douglas Tirola sets up his story on at least four intersecting levels. Each one build to a climax and feeds the next. Each of the levels is a familiar trope – but never seems hackneyed or trite.

1 – Young apprentice bartender Steve Schneider is willing to give everything to the craft, after an accident ends his career as a marine. His demanding boss, Dusan Zaric will decide whether Steve advances to professional bartender, or must start over. The action all takes place at New York’s hottest bar Employees Only.
2- The craft cocktail revolution has missed Westport, Conn. bar owner Steve Carpentieri. His once wildly popular nightspot is now facing failure. Will he adapt?
3 – The history of drinking in America, from the 1880s to today has heroes and mentors, with Prohibition being a notable low point, and today’s explosion of craft cocktails as a zenith. We meet all the players.
4 – The film reaches a climax as all four stories converge in an annual New Orlean event devoted to the cocktail – Tales of the Cocktail. Will Steve and Dusan’s bar be recognized as the best in the world? Will Steve Carpentieri get religion?

Keeping all these balls in the air, making you care about the stories, and bringing it all to a satisfying conclusion is a cinematic miracle. But even if this documentary is a textbook case of doing everything right, it wasn’t quite my favorite at SXSW. More to come on that…