What drives swimmer and journalist Diana Nyad? Molested by her father at age 11, and repeatedly raped by her swim coach at 14, Nyad reveals these truths which she recognizes as spurs to accomplish a seemingly impossible feat – swimming from Cuba to Florida (just over 100 miles) without stopping or sleeping and without the protection of a shark cage. 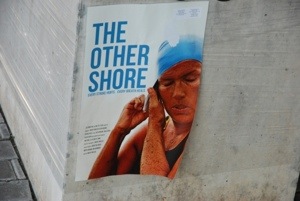 But these aren’t the only motivations for the world-record holding swimmer, who has failed at the challenge three times since turning 60, and once at age 28. So what drives her, and more to the point, how successful is The Other Shore, the documentary receiving its world premiere at SXSW, which reveals the story?

The best documentaries, after all, show growth, change, the overcoming of obstacles. Then there are films like Werner Herzog’s Fitzcarraldo and Les Blank’s related Burden of Dreams which show the uncomfortable and unsettling results of sheer obsession. It’s hard to like people who obsess – they ‘re different from most of us, and society isn’t really set up for their single-minded pursuits. On the other hand, they’re inspiring and without their energy and sometimes their grace and determination we would all be poorer.

As sheer storytelling Shore works to draw you in and keep your attention. At each milestone in the quest – the jellyfish stings, the drifting further and further off course, the “oh she couldn’t!,” moment before she makes her final try in a raging thunderstorm – you think, can’t she be reasonable? Won’t she quit? Please? But she perseveres.

Director Timothy Wheeler was present, seemingly, at every turn in the story, and even adds underwater photography to the visual mix. What’s lacking for me, oddly, in the midst of this stubborn life-and-death pursuit, is drama. Nyad’s fire in the belly erases any doubt each time the question of continuing or restarting the journey is broached. She will go on, even if it kills her. But in a perverse way, we come to wish she would just let go and move on.

Nyad led a walk during the festival and brought her inspirational message to an enthusiastic group of walkers, several of whom were from state offices of AARP. She talked about the next steps on her journey, and she told stories. And she was much more likable in person than onscreen.

Listen to an interview we did right before the walk…