Here at Washcult I’ve written about Hey Bartender, The Other Shore, the many faces of Sarah Silverman and some of the other fun I had in Austin at SXSW this year. In my post for AARP I briefly mentioned This Ain’t No Mouse Music, Downloaded, Rewind This, and Much Ado About Nothing. But I didn’t want the month to end without writing capsule reviews of some of the other  films I saw in Texas, which will be coming to theaters and festivals in the coming months. 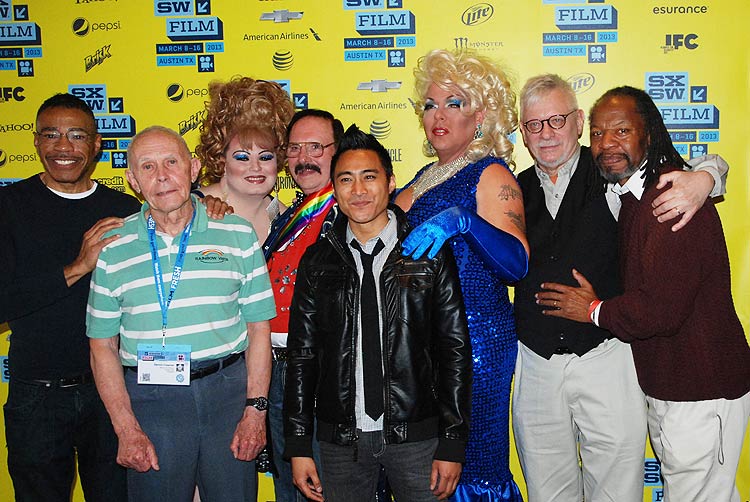 The cast of ‘Before You Know It’ with director PJ Rava.

Before You Know It
This story focuses on three older gay men who are worlds apart, and insists we find common threads in their lives.

Gay men who grew up in the last century witnessed and benefited from the revolution that allowed them to finally be themselves.

But they also were shaped by the restrictions  and complications society imposed on them. And many of them lost many, or most, of their friends to AIDS.

Dennis Creamer (second from left) lived for years in a marriage with a woman, waiting for the moments when he could dress up in women’s clothing and feel more like himself. He’s now trying to find the next act in his life, perhaps at a gay-friendly senior residence across the country from where he currently lives. Robert Mainor (fourth from left) runs a gay club that became an institution in Galveston, Tex., and Ty Martin (far left), a New Yorker and an activist, is tantalized by the possibility of marriage. But will his beau propose?

In bringing us into the lives of these three seniors (and I’ll have to admit I watched with my AARP hat on), director PJ Raval also insisted we answer questions about how the lives of gay elders are different than those for whom society has made it easier to form families and longstanding attachments. “Most of us don’t have children, or grandchildren,” Ty Martin told me. 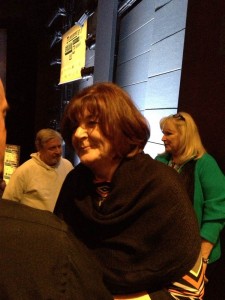 She was secretary for the Beatles

Good Ol’ Freda
Did you know that the secretary of the Beatles fan club has had a quiet and uneventful life, but played a key role in the ascendancy of the Fab Four back in the day? Well, meet Freda Kelly, who “tells her tale for the first time in 50 years.”

The tale is rather ordinary, which is what makes it poignant. Freda never sought fame or fortune. She resisted writing a “tell all” book despite scads of offers, and her most important and moving contribution to the band seems to have been making sure that all the fan mail got answered and that the boys’ families were taken care of amidst the growing madness around their fame.

“I was just another fan,” she says countless times through the documentary, and it’s clear she was. Although McCartney is not seen on screen, Ringo makes an appearance at the end, wishing her the best and thanking her for her service. Clearly she wouldn’t have wanted more fuss made over her than that.

William and the Windmill
This documentary won the judges’ award for its nuanced storytelling and appealing  central character. Malawian William Kamkwamba was just 15 when he put together a working windmill in his village, which generated electricity for his family, struggling to survive during a drought. The technology was easy to replicate with few tools and no complex materials.

Here William gives a “Ted Talk” about his windmills. He also wrote a popular book, and was adopted enthusiastically by Westerners as the face of young tech-savvy Africans who could change their continent.

What makes the documentary so compelling, though, is that it defeats all your expectations that William will be an uncomplicated hero, who fits our preconceptions. He’s not sure he wants to be different, or special. He’s not sure that being away from his family, or his home, and being held up to the world as a model of something is worth the personal price. And the movie is about how he wrestles with those concerns while still making his way forward in the world, enjoying but also wary of the good intentions of those who are keen to help him.

Sound City
Drummer Dave Grohl’s first documentary, this film is, in essence, a love letter to a mixing board. And it’s not just the Neve console that Grohl adores, but the days that records were recorded and mixed in all their analog messiness with tape recorders and other technology that’s gone the way of the rotary phone and 33 1/3 rpm record album.

Magic happened at Sound City, in the San Fernando Valley. It’s where Fleetwood Mac came together, Neil Young, Tom Petty and Nirvana recorded historic tracks, and where the sound of the drum was the key ingredient to making hits.

No, I wasn’t invited to the party where Grohl and his friends played music from the film’s soundtrack during SXSW. But I bet it was cool.

Some Girl(s)
Based on a play by Neil Labute, this film follows the journey of a writer, played by Adam Brody,  in the days before his marriage, as he visits and asks forgiveness of several former girlfriends around the country. Asked whether she ever thought about opening up the somewhat theatrical setting (all the meetings take place in hotel rooms, and those scenes comprise 95% of the film) director Daisy von Scherler Mayer said she considered the possibility and rejected it. The limitation suited the material just fine, she said.

Each scene has a particular mood, based on the personality and story of each woman and how she was wronged by the self-centered and oafish writer. Each sceme plays as a seduction. Will he sleep with any of the former girlfriends? Perhaps. Will they accept his apologies, and allow him to get on with his new life? Maybe. Most crucially, has he changed his consistently dickish behavior? Nah, never will. But the performances, especially those of Zoe Kazan and Emily Watson, make the film worth watching.

The film is clear from the beginning in its sympathies for the women, and reminds the audience that Labute was wrongly assessed as a misogynist when he first came into public view with his 1993 play (later made into a film) In The Company of Men .

Unhung Hero
Here’s the setup: Patrick Moote was in love. He was one of those guys who arranges to ask his girlfriend to marry him at a ballgame, with help from the kiss-cam and Jumbotron. Problem was, she said “no.” And to compound the insult, she told him that she didn’t want to spend her life with him because of his small “equipment.” It just wasn’t doing the trick for her.

If you’re a guy, and this happened to you, you may have had any number of reactions to this news — but the unlikeliest, probably, was that you’d make a full-length documentary about this concern and its solutions. Moote and director Brian Spitz travel the country and the world searching for cures. Pills, massage (jelqing), weights, operations. All are considered, many are tried. You’ll be rooting for Patrick, who seems like a sweet guy, and you may even be surprised at the ending.

I Am Divine
The American actor Divine was born Harris Glenn Milstead in Baltimore, Maryland in 1945 and came to prominence as an actor working with Baltimore’s own John Waters. Their collaboration in the film Pink Flamingo includes what some consider to this day the most tasteless moment ever memorialized on film.

But the reason this film is so wonderful is that is brings Divine to life as an actor who wanted to break out of the confines of drag, and be allowed to play any role he could win. At his death in 1988 he was just about to get a big break, the film reveals, which may have set him on the path he so wanted. And that sad, ironic end to a story of perseverance and grit makes the film a great American biography.