Baryshnikov and Chekhov, Together in Washington

Multimedia is a term that covers a lot of sins; it’s so broad as to be nearly meaningless. But artists who can magically combine dance, music, theater and video in the service of storytelling can scramble our brainwaves and keep us off guard. The best work of this kind finds unexpected ways to connect with our intellect and our emotions.

But let’s start with the evening’s star — since it’s not every day you can spend an hour or so in the company of a “dancer, choreographer, and actor, often cited alongside Vaslav Nijinsky and Rudolf Nureyev as one of the greatest ballet dancers in history.” (Thanks, Wikipedia) Mikhail Baryshnikov is in town, and you should see him, even if he was reading the proverbial phone book.

(To view Gallery of photos from Man in a Case full screen, select any picture. To navigate, use arrows right and left. To close, click X in upper left:) 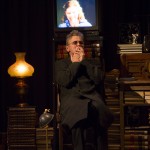 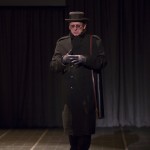 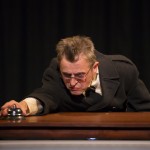 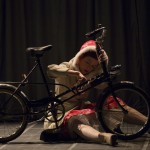 The show, which premiered at the Hartford Stage Company and has toured to small venues around the country, tells a pair of love stories, or as they’re sometimes described, “anti-love stories.” Each concerns a man who is unable to love, thwarted by his own limitations, or by societal conventions.

The stories themselves are mordantly funny, emphasizing the hemmed in quality that keeps us from truly experiencing our emotions. The “man in the case,” for example, is almost literally encased by his few possessions, and by conventions. His life is fully realized only when, after his death, a coffin enfolds him.

With every movement, Baryshnikov indicates how the world can press in and limit a man’s world. No matter what he does on stage, he never lets us forget that he’s a dancer.

Annie B-Parson and Paul  Lazar of Big Dance Theater construct a compact evening from these two tales, wrapping them in a further frame of storytelling that echoes Chekhov’s original, but seems completely modern.

While love is impossible, art itself can rescue us, the production hints — and that makes the endeavor life-affirming rather than merely depressing.