‘The Importance of Being Earnest’: Bright, but Shallow

There’s nothing wrong with The Importance of Being Earnest, on view, and already extended, at the Shakespeare Theatre in Washington. It’s funny, gorgeous, and seems to capture Oscar Wilde’s satirical take on upper crust British mores just perfectly. 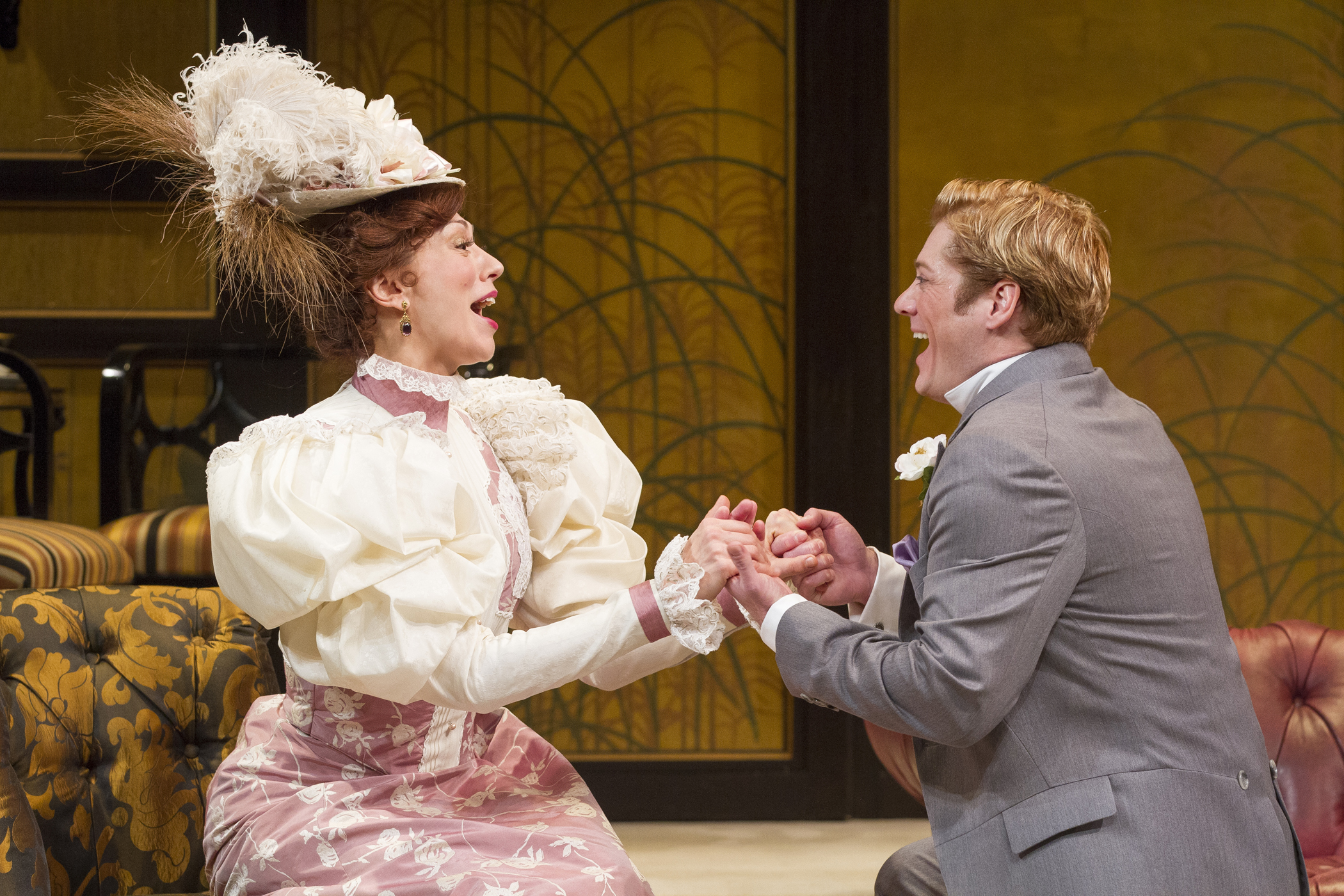 Vanessa Morosco as Gwendolen and Gregory Wooddell as Jack in the Shakespeare Theatre Company’s production of ‘The Importance of Being Earnest.’ Photo by Scott Suchman.

So it seems ungrateful to complain about the show’s one flaw: The people in it never seem to talk to each other, or care about each other, and the production lacks a beating heart.

I’m always eager and ready to blame myself for not catching the drift, or getting in the mood, especially when an audience, like the one at Shakespeare’s Lansburgh Theater, seems to eat a production up. But I’ll stick to my guns. There are, after all, two couples who could be getting hot for each other, and one of the most sharply drawn biddies in theater history — that’s Lady Bracknell, played by the well-traveled British actress Siân Phillips — to amuse and entertain us.

And the wit and verbal pyrotechnics (“To lose one parent may be regarded as a misfortune; to lose both looks like carelessness!”) do carry us through three brisk acts, with two intermissions. But I refuse to believe that a dose of true connection between any two of the characters would have derailed director Keith Baxter’s well-oiled train. For me, it would have made all the difference between something that seems to skim the surface, and something that might dig a little deeper.

If you’re not familiar with the play, read it. Then go see it. You’ll meet Jack Worthing, and his friend Algernon Moncrieff, who find themselves wooing Gwendolyn Fairfax and Cecily Cardew, using whatever tricks they can muster. For the women, the only hitch is that the men aren’t named Ernest. Nor are they earnest. A mid-life christening can solve the former problem, but can their character flaws also be corrected?

A handbag, a manuscript and a forgetful nanny shake up the story in the end, clearing the way for the couples to unite and receive Lady Bracknell’s blessing. For all her pretensions, she’s been unmasked as a greedy poseur, but one whose company we’re willing to put up with because she makes us laugh, and because there’s a smidgeon of wisdom hidden in her haughty exterior.

As always, Floyd King is priceless. Here, he’s Dr. Chasuble, an old vicar whose slow burn double takes are worth the price of admission.

Presenting The Importance of Being Earnest, a director might claim that the show’s shiny surface is, in fact, its heart, and that the witty banter, the gleaming characters and their crises and calamities are what the play is made of. The Shakespeare Theatre has brought us too many satisfying evenings of comedy drawn from a deeper well for that argument to be accepted.