We first meet Frannie Potts as she settles into her seat getting ready  to take off from L.A. Her seatmate, a businessman, wants the shade drawn so he can work his spreadsheets. Frannie refuses and we imagine Mr. Spreadsheet wonders whether he’ll be able to stand the trip ahead.

We wonder the same thing. Who is this annoying woman, and what is her story?  How will it feel to spend an hour with her? 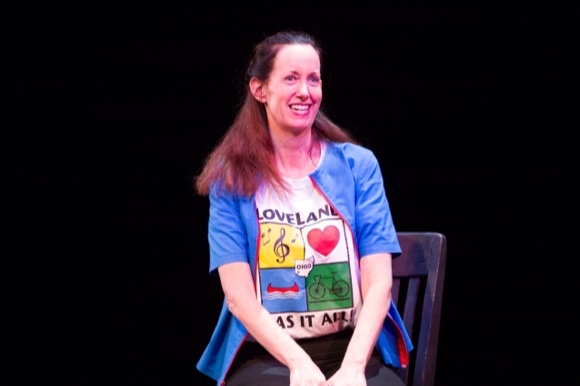 But Frannie grows on us, as she takes over the plane with her demands: pushing the button to summon the flight attendant, dancing in the aisles, initiating imaginary trysts with the pilot. Commanding the window seat, which gives her a bird’s eye view of her beloved America, she shares her secrets and fears with us.

Who is Frannie? She’s a woman from Ohio, who finds love, or at least secret orgasms, in the Whole Foods in L.A. where she has moved with some nebulous ambitions. She’s led a life entwined with her overbearing mother, whose decline and death are the main markers in Frannie’s recent life. With mom’s ashes stowed precariously in the overhead bin, Frannie is on a mission to find them a final resting place.

We finally come to terms, as she does, with this incalculable loss. At the show’s ridiculous but appropriate climax, the ashes are set loose in the cabin, and we feel coated, as she is, in her mom’s ashes and her overwhelming grief. But Frannie is a survivor. And we have been energized and cleansed by spending an hour or so in her company.

Frannie is played by Ann Randolph, as are all the characters she interacts with on her journey. It’s no accident that Frannie includes “Ann,” who tells the audience at the close of the show that these performances are a way for her to explore and come to closure about recent life events.

And we have a chance to join in after the show, too. Randolph leads a workshop after each performance at Washington’s Arena Stage where audience members can write and share their own stories of grief and loss. It’s the kind of work she does all over the country, in addition to her writing and acting.

So back to the transformation we go through as an audience — meeting, rejecting, understanding, empathizing with and finally coming completely under the spell of Frannie, as she reveals, layer by layer, her humanity and individuality. She is and is not Ann Randolph. And we have no trouble imagining ourselves in her skin on that eastbound plane.

Loveland, directed by Joshua Townshend-Zellner runs from March 18 through April 13 at Arena Stage in Washington, DC.

This entry was posted in arts news, storytelling, Theater. Bookmark the permalink.