Young Hal has daddy issues. His father, King Henry, is stern, distant and preoccupied with the rebellion fracturing England. The father figure he’s chosen, the fat and lecherous Falstaff, is a thief and a coward, but that’s just fine with the prince on most days. And before the two parts of Henry IV are done, there will be at least one more man for Hal to model himself on and look up to, the Lord Chief Justice, who stands for all that is moral and right, a man who couldn’t be more different from the greasy whoremonger Jack Falstaff. 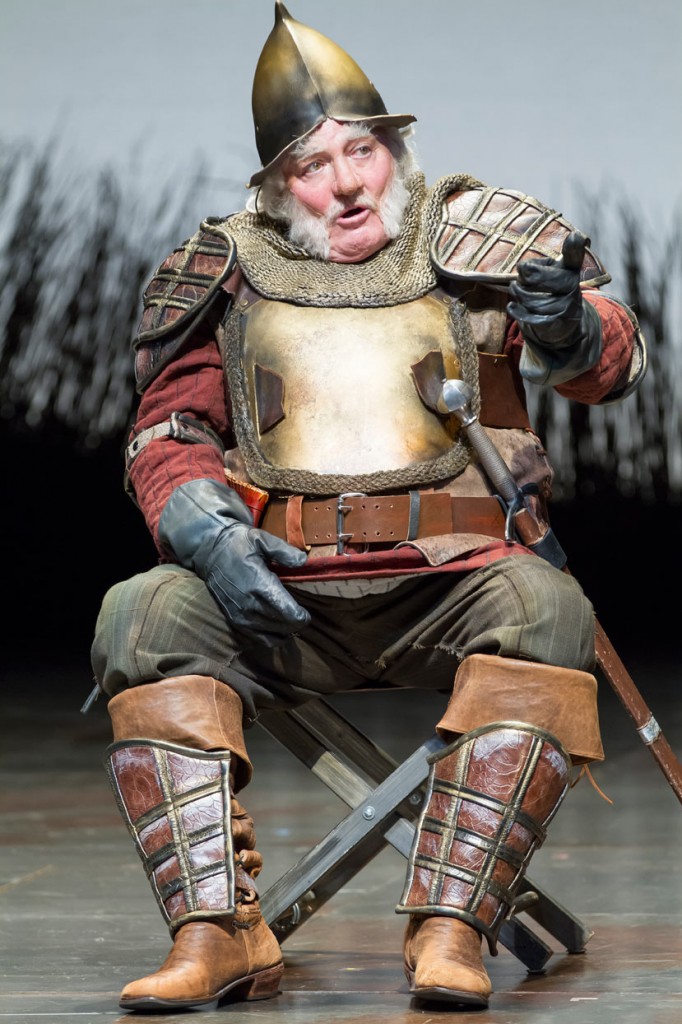 The posters around town advertising Henry IV, Part 1 and 2 at the Shakespeare Theatre mostly feature Stacy Keach as Falstaff, well hidden in the fat suit and whiskers. Often during the play, he wears this ridiculous armor. He is “Sir” John, after all, a “knight.”

Many in the audience are coming to see the actor in this role, which he first tried in his late twenties. Whether playing Hamlet or Richard III, Keach is that rare American performer who has kept up his classical chops while becoming a popular star on TV (Mike Hammer) and in movies like the recent Bruce Dern vehicle Nebraska.

When last we saw Keach in D.C., he was at the center of the Shakespeare Theatre’s red hot, Balkan production of King Lear. His portrayal, and the production, were highlights of my 25 years of theater going in Washington. I’d looked forward to Falstaff as a benchmark to see how far the actor can stretch, and his achievement is impressive, even though I’m nagged by quibbles. 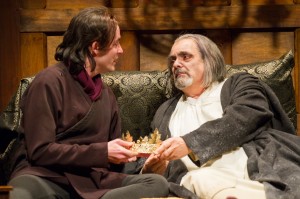 First, back to the plays… Before the two parts of Henry IV are done, Young Prince Hal will cast off childish things, including Falstaff, and ascend to the throne. To do that, he must come to terms with his dad, and overcome the fiery Hotspur, a rival. Matthew Amendt’s performance as Hal is nuanced and full, and his unformed features, already softened by too many good times, will grow into the visage of a king during the course of the two plays.

What is wonderful about Amendt’s Hal is that it lies squarely in the tradition of director Michael Kahn’s lifetime of Shakespeare work. No matter how Kahn propels the actors through time and space, in the beginning is the word. Painting with words, Amendt draws his maturing soon-to-be king.

For me, Keach falls short as Falstaff because he fails to completely trust Shakespeare’s language. He’s nailed the fat man’s shuffle, and he deploys a symphony of bleats and harrumphs to comic effect, but there were many times, especially in Part 2, when I was left wondering exactly what Falstaff had said. By extension, it felt at those moments that the portrayal was  approximate and a little vague.

What does come through in Keach’s Falstaff is intelligence, wit and enjoyment of life. He’s a sentimental codger, and Kahn has left no doubt that when Hal throws him overboard, it breaks the old man’s heart.

Near the end of Henry IV, Part 2, Kahn has created a stage tableau, one among many he assembles in the two shows. Falstaff has positioned himself along the red carpet the newly crowned king will pass, and Sir John expects not only to harvest the rewards of his years of friendship with Hal, but he’s promised his buddies that they, too, will receive the king’s largesse. Rejected, and soon to be arrested, Falstaff is crushed, and if the air could go out of his giant frame, it would.

Like every big moment in the two plays, Kahn has directed this one to within an inch of its life. The picture is unforgettable, yet it feels like a moment in grand opera, slightly too big for the space. Perhaps that’s my deeper problem with this set of two Henrys. These big moments seem italicized, rather than lived.