‘Fiddler on the Roof’ Takes Washington 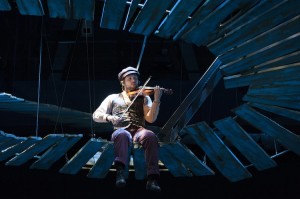 “Do you love me?” It’s a question that long married couples sometimes ask each other, but never with quite the verve that lyricist Sheldon Harnick and composer Jerry Bock summon at the start of Fiddler on the Roof’s second act. “Do you love me?” Tevye, the dairyman repeats. “Do I love you?” his wife Golde answers. Ah, Jews, always answering a question with a question.

Molly Smith has staged this pivotal scene in Fiddler with such delicacy and power, with the couple starting their dialogue on opposite sides of Arena’s round stage. By the time the question is answered — and you don’t have to be clairvoyant to know where the conversation is headed — they walk off stage, casually, together, as they’ve been for 25 years and will be until death do them part.

It’s a signature moment in the show, and speaks to Smith’s clean, clear staging and her ability to stitch together these moments into a vivid and compelling story. And in this effort, she’s aided by a sweet, understated performance from her leading man, Jonathan Hadary, who carries the show on his small back.

Of course, the first Tevye was neither sweet, nor small, nor understated. And every Tevye since has labored in the shadow of the larger than life Zero Mostel. So Smith and Hadary don’t try to make their hero big or blustery. He exercises his authority over his wife and five daughters through “Tradition!” of course, and through the force of his quiet and persuasive personality.

It’s no surprise that this Tevye yields to his daughters as they flout his wishes and seek their own way, but it’s no less heartbreaking when he takes a stand against his third eligible daughter when she decides to fall in love with a gentile. Will Tevye relent? Of course he will.

The other moment that stays with me is the climactic Act One dream sequence, a trick concocted by Tevye to convince his wife they must break their word to butcher Lazar Wolf and instead give their oldest daughter — unmarried and all of 20! — to the tailor she loves. For this comic and seismically energetic scene, Smith brings to life a Chagall mural’s worth of creatures and characters, led by an apparition that rises from Tevye and Golde’s bed, and brings down the house.

Golde is convinced she’s been visited by spirits and allows her daughter’s marriage to a pauper, and the story’s direction is set. That nothing else in the show quite rises to this level of zaniness is only to say the scene is perfect.

But zany is not the only thread here. Like Cabaret, which would follow only two years later, Fiddler would have called to mind  the Holocaust, which was a vivid memory in 1964, less than two decades after the close of WW II. And the Russian pogroms that figure prominently in Fiddler and send the family fleeing from their beloved Anatevka, would have connected personally to the lives of many in the contemporary audience.

You can waste a lot of time going to Washington theater and wishing shows were perfect. In Fiddler on the Roof, for example: if only the accents weren’t coming from every corner of a turn of the century Europe that never was; if only a few of the voices were stronger.

But perfection is hardly the point when you go to the theater. You go to be moved, to be reminded you’re human, to be transformed. Fiddler does all that, and more. And when Molly Smith introduced lyricist Sheldon Harnick (seeming hale and hearty at 90) Wednesday night to an adoring crowd, we gave him a rousing cheer of thanks.

Modest, understated, like Hadary’s Tevye, Harnick simply said he was sorry he couldn’t share the night’s joy with his collaborators, all of whom he has outlived.

Fiddler on the Roof continues at Arena Stage in Washington, D.C. through January 4, 2015.