Louis Jordan isn’t a household name, though by rights he should be. Plausibly considered the father of rhythm and blues, rock ‘n roll and even rap, Jordan sits as a forebear in the Rock and Roll Hall of Fame. He performed as a vocalist and saxophonist creating hit after hit in the 1940s, until his style of jazzy rhythm and blues ran into the buzz saw of rock in the 1950s. Here, Jordan and the band perform “Choo Choo Ch’Boogie.”

Jordan died in 1975, and as one biography has it, “profess[ed] some bitterness about the career setback that rock and roll had dealt him.” A man before his time.

Jordan’s music provides the raw material for Five Guys Named Moe, a jukebox music that was a Broadway hit in 1992 after opening in London’s West End two years earlier. The book is by the much too talented Clarke Peters (left), best known for his starring roles in HBO’s The Wire and Treme. Peters’ laughter could be heard in the theater opening night, and, along with the rest of the audience, he seemed to be having a ball.

What’s the setup? Nomax, a victim of drink, woman trouble and money trouble, is listening to an old radio playing scratchy jazz at center stage. The radio announcer seems to talk back to him magically, and suddenly he finds himself in the middle of a musical review featuring five dynamic performers. The songs of Louis Jordan, generally upbeat and often familiar swinging standards like “Choo Choo Ch’Boogie,” “Caldonia” and “Saturday Night Fish Fry” are going to help him come to better terms with life and love. 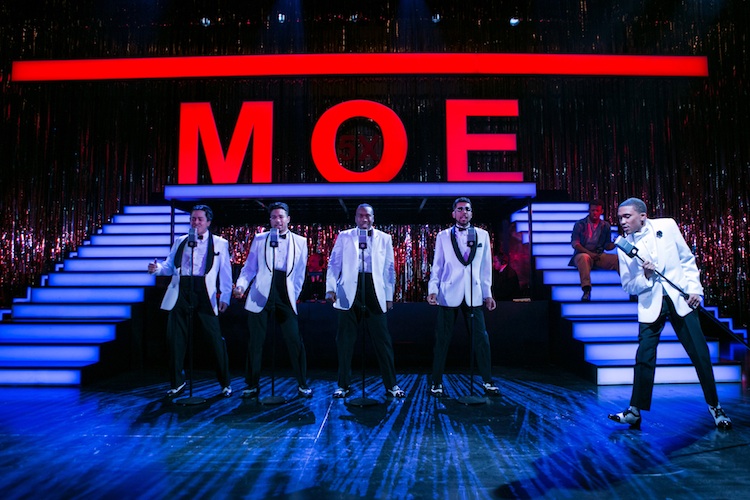 Whether or not they help Nomax, they certainly help us. The singing, dancing and harmonizing create a small nightclub of the mind in the intimate Kreeger Theater at Arena Stage, and the interior aspects of the concept are emphasized by set designer Clint Ramos. The five guys are Moe, the set is an ever-changing kaleidoscope of Moe (seen above in its red mood) and lights, costumes and sound all exist to emphasize the idea that the Moes may indeed be five fragments of Nomax’s imagination — equivalent to good and bad angels sitting on his shoulder. 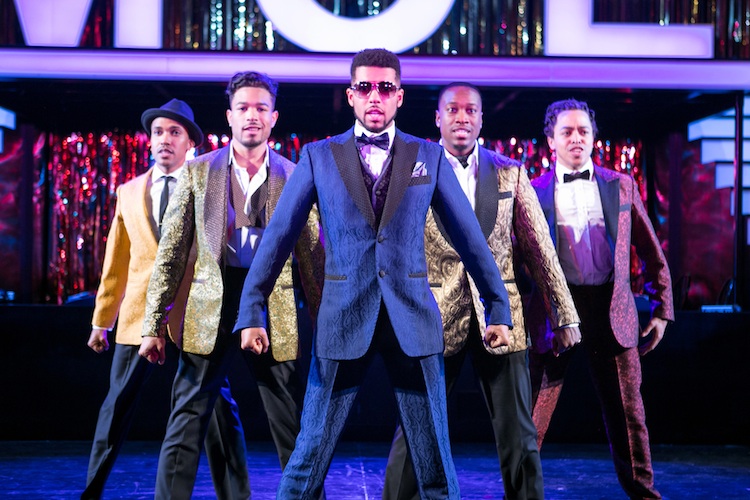 Director Robert O’Hara didn’t want the show stuck in amber. His concept: update everything from the music to the costumes, consider the Moes a “modern day boy band” that sings in the “old grooves.” With go-go beats cascading from Mark Carson’s drum set, the rhythms connect Jordan’s jazz, early rock, D.C.’s own unique sounds and today’s chart topping hits to make a convincing case that Louis Jordan is at home in any era.