Shakespeare’s ‘Tempest’ in D.C.: The Magic of Theater 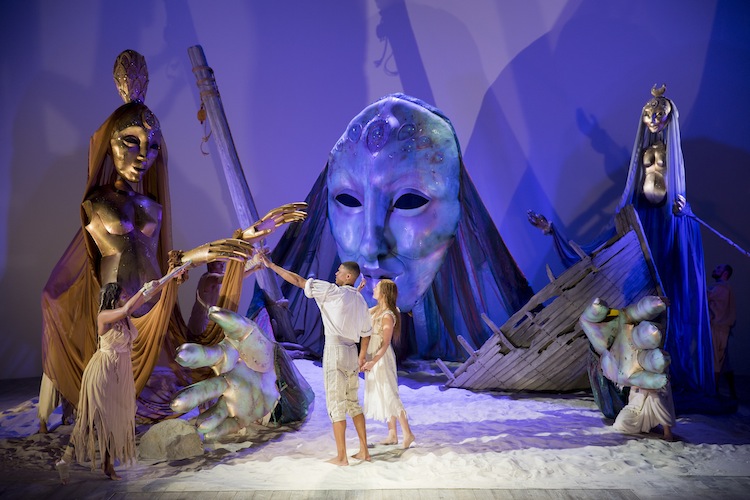 The Tempest is thought to be the last play Shakespeare wrote without collaborators. Commentators often describe Prospero, the exiled prince and lord of the enchanted isle where the action takes place, as a stand-in for the playwright. Creating a storm onstage, tormenting characters with magic, making others fall in love, that’s the work of a magician … or a writer.

But the play is not successful if the metaphor overwhelms the action. Catharsis comes from the heart and not the head. Director Ethan McSweeny doesn’t belabor the theatrical overlay, but deploys it just enough to create a splendid evening of theater.

As the play begins, lightning flashes and thunder booms, the eponymous storm attacks a ship carrying Alonso, the King of Naples and Antonio, Prospero’s treacherous and usurping brother, along with several other lords. The noisy storm illuminates a decaying proscenium arch, which showcases what we’ll soon see as a sandy island. Frames within frames. 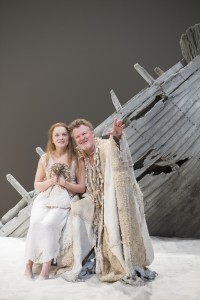 Prospero tells his daughter Miranda that the men on board will be safe as he guides them to the island. Soon he will begin scheming to arrange a match between her and Ferdinand, the king’s handsome young son. Prospero’s minions include Ariel, a flying sprite, and Caliban, a chained slave. Both are bound to him, but the ropes which pull her heavenward and the chains and rocks which bind him to the earth suggest that Shakespeare is aiming to create parallels in their fantastical servitude.

As Prospero, Geraint Wyn Davies owns the stage whenever he’s on it, and makes us miss him in the long stretches when he’s not. Although all the actors have an ease with Shakespeare’s language, Davies uniquely seems to own it as a mother tongue.

As Caliban, Clifton Duncan sometimes seems to wrestle with an accent vaguely of the Caribbean as well as the task of showing Shakespeare’s idea of a “savage.” That we end up touched by his plight supplants any of this unease. As Ariel, pulled ever upward by a sturdy rope, rather than a gossamer string, Sofia Jean Gomez shines as the spirit who embodies the island’s magic.

And that magic comes to full fruit in the delightful second act, aided by the spectacular puppet designs of James Ortiz. By the time Prospero strips off his magical garments, returning to mere royalty — his daughter safely married and his Dukedom restored — he is, then, paradoxically free to step out of character, and become an actor, begging for our applause as the curtain falls (“release me from my bands/With the help of your good hands.”).

After a night of magic, the audience I sat with rose to its feet at this, and you may, too.

The Tempest continues at the Shakespeare Theatre Company in Washington, D.C. through January 11, 2015